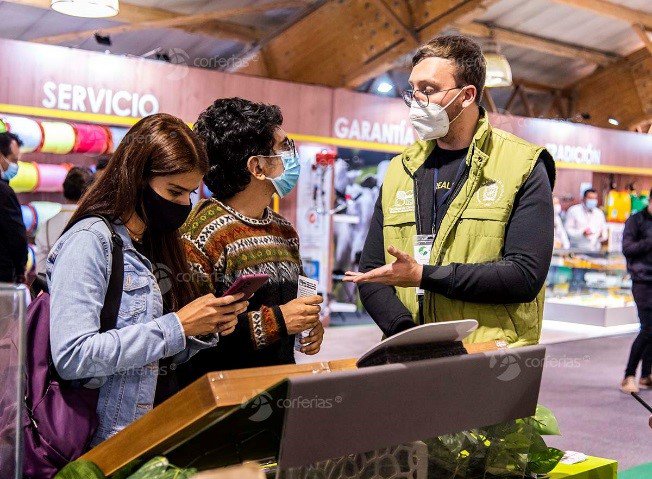 AGROEXPO 2021, closed with nearly 100,000 visitors who enjoyed this face-to-face version

Bogotá October 2021. Corferias was the setting for residents of the capital, visitors and foreigners to enjoy the XXIII version of Agroexpo. This edition had 100,000 visitors and was held under the premise " we all put our shoulders to the field." For 11 days, field professionals, producers, ranchers, industries, institutions and families, enjoyed different events such as academic agenda, judgments, talks area, congresses, forums, auctions and activities on the track. This face-to-face edition had nearly 400 exhibitors and the representation of companies from seven countries .

Andrés López Valderrama, executive president of Corferias, highlighted that, “with this version of Agroexpo, we are not only contributing to the economic reactivation of the country, it was also the setting to learn about the processes involved in the harvesting and production of food. It is noteworthy that, thanks to the commitment and work of our farmers, transporters and the different actors that are part of this sector, we all have during one of the most difficult times that humanity has faced with fresh food in our homes. This is how in Corferias we witnessed how the different actors of the agricultural and livestock sector met again, without a doubt it was the opportunity to thank this industry that never stopped and worked for the nutritional well-being of the country ”.

And, in 2020 the agricultural sector grew 2.8% despite the general contraction of the economy of 6.8%. was the only one to present positive figures with a growth of 3.8% in the first quarter of 2021, according to the National Administrative Department of Statistics (DANE), and the domestic market absorbed the crops that were destined to be marketed in other countries .

“This positive behavior was reflected in the version of Agroexpo, since during the 11 days, immediate business was generated, in the short, medium and long term, it was an experience in which the public enjoyed more than 3,500 live animals; among them 350 horses, of different modalities such as; gauge and gallop, trot and gallop, pure gauge and Colombian fine walk, we also have judging of sheep and goats anco, asosimmentalsimbrah cattle, asoayrshire, asojersey and asopardo cattle ”, revealed Daniel Espinosa, president of the National Union of Colombian Cattle Associations, UNAGA .

For her part, Doris Chingaté, project manager of Agroexpo, Corferias, added that, “ this version organized by Corferias and the National Union of Colombian Livestock Associations, had the special participation of the Ministry of Agriculture and Rural Development. It also received representatives from 14 departments in Colombia and seven countries, Brazil, India, Venezuela, and the United States. France, Italy and Spain ”.

Under this panorama, the fair had as its guest of honor the department of Boyacá, “we are very happy, Agroexpo gave us the opportunity and our region for the first time became the guest department of the fair, we participated with 110 exhibitors, 55 municipalities, 11 provinces and 30 associations. And, here in the framework of the fair, we ratify that we are the agricultural pantry of Bogotá and one of the most important in the country; We are grateful for allowing our farmers to have a showcase to show those who did not know everything that we produce ”.

Along these lines, Agroexpo had unique experiences aimed at both specialized audiences and professionals, entrepreneurs for both families and followers of agriculture and livestock. There were more than 250 activities that made up the fair's agenda, among which were equine parades, conferences focused on cultivation, new technologies and practices, rural housing, judgments and auctions, among others.

Undoubtedly, version number 23 contributed to the reactivation of the country's agricultural and livestock sector, facilitated the marketing channels for producers, marketers and consumers; brought together the most representative companies in Latin America, to promote the evolution of the industry in all its stages and projecting competitiveness at the international level to make this sector visible, which is fundamental both for the country and for the world economy.

Agroexpo was the setting for 236 exhibitors to carry out more than 302 business meetings, in which more than 40 buyers from Colombia, Ecuador and Venezuela participated.

It is noteworthy that business was conducted for USD 2,282,950 at the conference, and a total business expectation of USD 5,670,263 was left, distributed as follows :

SOME OF THE ACTIVITIES THAT WERE CARRIED OUT IN AGROEXPO

The presidency of the Republic on behalf of the first lady, Maria Juliana Ruíz, chose version number 23 to carry out the discussion 'Colombia, producer of nutrition, health and well-being', organized within the framework of Agroexpo by the International Colombia Corporation (CCI) and the company Sáenz Fety, the First Lady of the Nation, María Juliana Ruiz, highlighted how nutrition and food security have been at the center of the public agenda and how the Great Alliance for Nutrition has been a fundamental axis in contributing to the country's food security and in its purpose to combat, and where possible, eradicate associated deaths and child malnutrition

The First Lady also made a tour of the different Agroexpo pavilions, it was the case of the Boyacá pavilion, guest of honor, with more than 100 representatives, who are participating with typical products from that region of the country, where they met and shared with entrepreneurs of this department, who are committed to strengthening food security.

Within the framework of Agroexpo, the Ministry of Agriculture launched the contract farming program. In response, Rodolfo Enrique Zea commented that, “We already have 200 thousand producers and 1000 commercial allies, which allow us to commercialize, without intermediaries, with stable contracts and fair prices. We have made progress in all that are exports of the fishing sector, for 2020 we had the highest exports in history with 7,856 million dollars, this year as of August we are growing by 19%, but we hope to exceed 8 billion dollars. Dollars. Agroexpo was the perfect setting to make visible all those farmers who were affected by the pandemic and who today are once again the economic engine of the country ” .

La Licorera de Cundinamarca opened its doors to the bar, which is located between pavilions four and five. This space will remain permanent within the fairgrounds until a new date. “It has been one of the best versions of the AgroExpo, we have achieved average sales of 8 to 10 million, managing to exceed the expectations we had for the fair, this is very positive for the reactivation that is experienced after all that was experienced by the COVID-19 pandemic 2 concluded Marcial Suárez de Licores de Cundinamarca.

AGROEXPO IN THE VOICE OF THE EXHIBITORS

“The fair met our expectations and proposed goals, since we had a high flow of visitors. I want to emphasize that the handling of the biosafety protocols were excellent and both visitors and exhibitors complied with all the measures, from the mandatory use of masks to the disinfection points arranged both in the enclosure and inside each pavilion "expressed Vanessa Jurado , representative of the Mini Horse Farm.

"One of the biggest challenges for the Colombian industry is to learn from examples such as Brazil, since not only does it not waste anything from the meat industry but it is also responsible, because it generates the sustainability of the entire meat and fish production chain By preventing its waste from polluting the soil, water and air, with our participation in Agroexpo, we managed to leave positive footprints in the matter, "added IcceGarbellini, in charge of Brazil's participation in Agroexpo.

Finally, it is important to highlight the excellent behavior of those attending the fair, the collective awareness of self-care in the face of the pandemic and the unstoppable desire to support the only sector that has never stopped working, the food production chain. Without a doubt, this fair leaves the doors open to the economic reactivation of this and all the productive sectors of the country and the realization of massive responsible events that promote the development of Colombia.