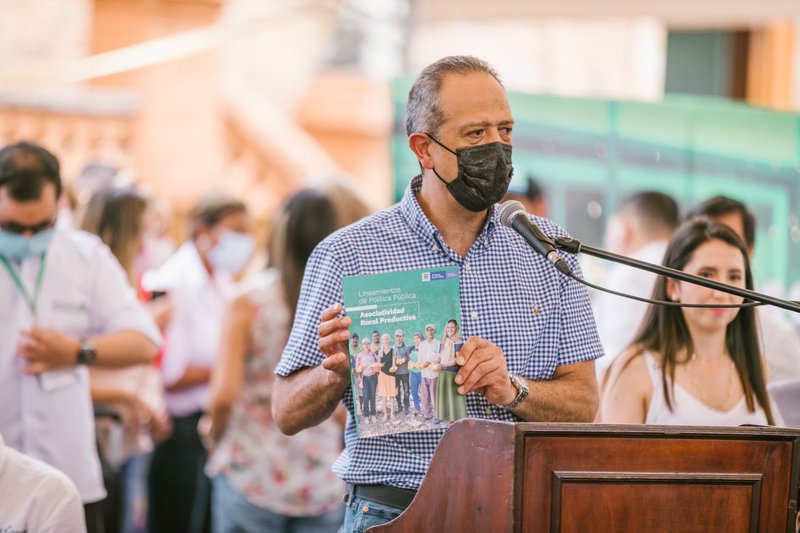 Cali (Valle del Cauca), October 25, 2021 (@MinAgricultura) In order to strengthen rural associativity, as a mechanism for the economic, social and environmental development of the territories, the Ministry of Agriculture and Rural Development launched the Guidelines Policy for productive rural associativity, which will benefit the country's small and medium producers with productivity and marketing issues.

The Minister of Agriculture and Rural Development, Rodolfo Zea Navarro, said that “rural associativity is a fundamental axis for the transformation of the Colombian countryside, since, through collective action, producers can more easily access inputs, end markets, financing , technology, technical services, information and support from the Government, as well as from other actors. This is the bet of the new Rural Associativity Policy ”.

For his part, the Vice Minister of Rural Development, Omar Franco, who participated in the event, said that "through the new guidelines established by the Rural Associativity Policy, producers will be able to access economies of scale."

And, according to data from the 2014 National Agricultural Census, only one in 10 producers is associated and in practice, many of the organizations that are created do so for short-term purposes.

It is precisely these problems that the new associativity policy will attack, which will develop the following points:

The Route for Productive Rural Associativity:

This is a tool that will make it possible to disclose the entire institutional offer of the agricultural sector and to which producers will have access.

Integrate and structure the registry, as well as the characterization of the organizations served by the public offering.

This instrument will provide specific inputs for the development of associative content for the Agricultural Extension Subsystem. In addition, it will be complemented with a step-by-step guide for the formation of rural producer organizations.

This instrument will be aimed at both producers and organizations, as well as extension agents, operators, NGOs, state entities or any other actor interested in learning about or implementing associative training processes.

This instrument will also be an input for the implementation of a tutoring strategy for young people and pensioners to increase the capacities of rural producer organizations.

Design a strategy for the promotion of commercial alliances, between networks of large organizations or organizations, and large buyers, as dynamic processes of local productive development.

Finally, Minister Zea Navarro added that the implementation of these actions will be carried out in an articulated manner between actors of the National Government, local governments, international cooperation organizations, producers and the private sector, in order to increase the scope and impact, making rural associativity, an engine for the development of the Colombian countryside.

Peasant Market with the participation of 400 farmers

After the launch of the associativity policy, the regional peasant market was held, 'Pacífico Agro, cultura y sabrosura', in which 400 producers from Afro, indigenous and peasant communities participated.

These producers came from the Litoral and the Andean region of the region offering their crops to approximately 5,000 people who were at the event.

Additionally, cultural and gastronomic samples typical of the Pacific region were held.